The Bertoia Diamond Chairs. Sculptural steel for sittin' in! You'll never guess where I aquired these. Status: Not Available. 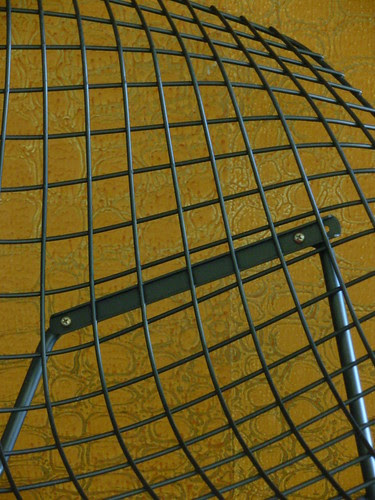 They're not just beautiful but super comfortable too, despite reports to the contrary! Ok...so yeah, you're gonna need to cover that wire with something but otherwise...lounge time, baby. 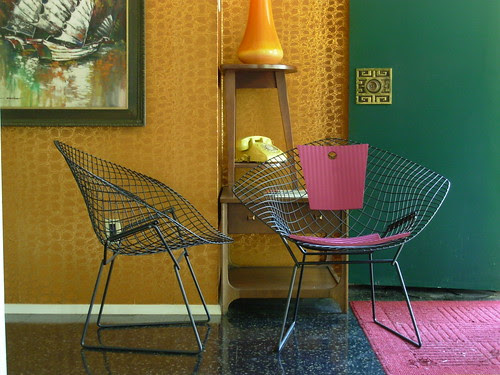 So here's a little story about a drive by find. Mr. Modtomic and his girlfriend LOVE the Drive In theater (get your mind out of that gutter). We were staying on the South Side at the time and the Drive In (Sky View) is in Belleville Il. So the short cut to Belleville from South City is through East St. Louis Il. and yeah, I'm takin' the shortcut. So we've crossed the big muddy and are cruising along a side street to avoid getting caught by the train crossings on the main street when I spot it. I think the girlfriend bumped her head on the windshield, I hit the brakes so hard. Truth is, I didn't even know what it was. I just knew it was SOMETHING. 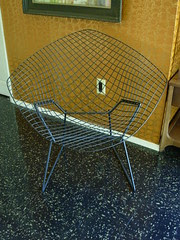 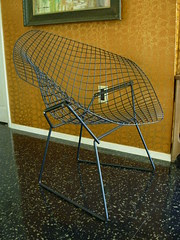 So I'm sitting there in the car wondering if I should go ask if the owner would even consider selling it (chainlink fence - maybe containing a dog?) when the home owner pulled up in her car. Lucky break! So I just got out and..well, asked! Turns out her employer had given her maybe a dozen (A DOZEN!!!) of these chairs. She and her sister had sold most at yard sales. She thought her sister had three or so more left at her place, but she couldn't get a hold of her. So I asked her to give me a call after she talked to her sister and she called me later that evening while we were at the Drive In. Her sis only had one left. So Two it was. I was fine with that. 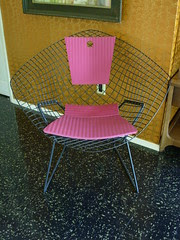 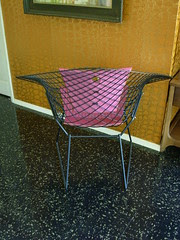 I came by the next weekend and picked them both up. The one that had sat for god-knows-how-long on the lady's porch had the original cover on it but it was so bad. It looked like an animal had died in it...a long, long time ago. So it went into the trash. The other had the small seat pad, but it too was in too bad a condition to use. Too bad, 'cause I'm sure they were the original Knoll covers. 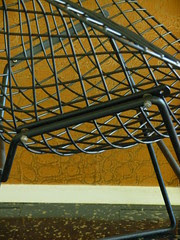 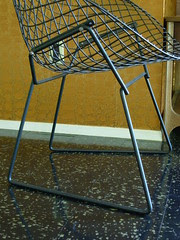 And yeah, the finish left quite a bit to be desired. I used a wire brush to clean them up and hit them with a couple coats of Satin Black spray paint. I think this very closely matches the original color of the chairs. I've tentatively made some pads for the chairs and attached them. They WORK but I don't know about the color. I might cover them with batting and upholstery material.
Posted by Mr. Modtomic at 12:52 AM