I'm Not Much Of A Morning Person But Sometimes Waking Early Can Really Pay Off. Being On Craigslist When This Pair Of Richard Schults / Knoll Outdoor Tables Popped Up Was Just Preparation Meeting Opportunity. Status: Available / Project. 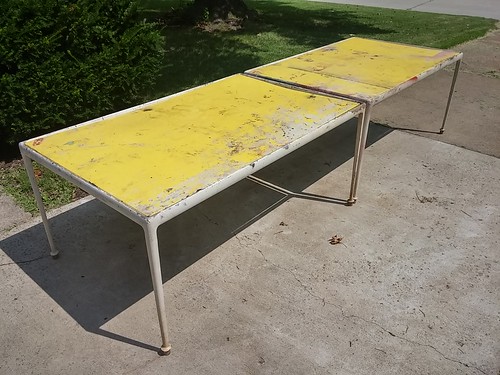 These look a hot mess, but when you've done enough research into vintage modern design they are instantly recognizable as being a Knoll product designed by Richard Schultz.  They are in fact the 1966 line of outdoor tables in aluminum with porcelain steel tops.  Tables worth taking a second look at! 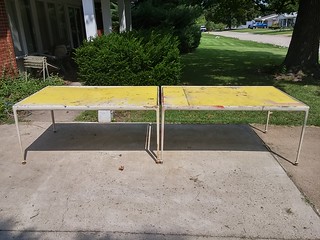 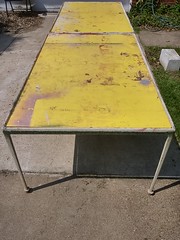 They were listed as "work tables" and I cringe at the thought of what misdeeds have been done to them.  There's overspray all over them from somebody rattle canning various projects, but the bones are still good and there's plenty of life left in them.  I have't done anything to them yet.  This is exactly how they looked when I picked them up.  Pretty rough.  I'm making them available as is, but I might end up striping the frames, repainting them and cleaning up the tops myself. 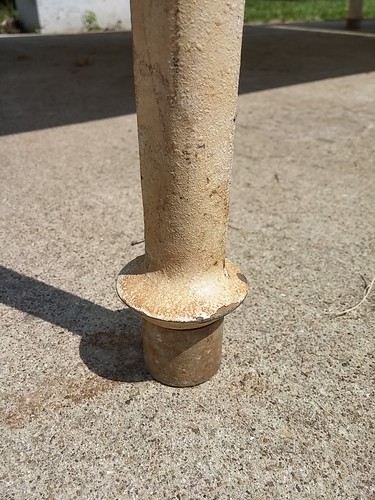 When I picked them up I was in kind of a hurry since I still had to get to work on time (and I had to drive about 60 miles to acquire them) so I didn't have the opportunity to give them a real good once over.  I did notice the strange extensions of the legs after the feet.  I didn't notice at the time that the extensions were tall glides or feet so when I started looking around on line at other 1966 tables I was baffled by them.  A buddy of mine with a high end vintage modern shop informed me that these tables are kind of odd in that they are somewhat shorter than a standard dining table.  Ah Ha!  That's why the legs have extensions! 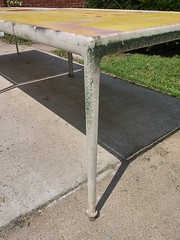 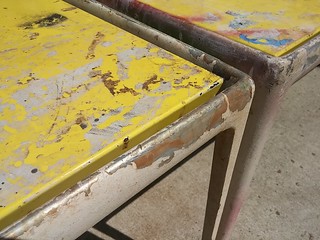 Beat and battered as they are, there were lots of others who were keen to deny me this set.  After driving about an hour to pick them up and just as I was leaving the highway (a mere 4 minutes from the seller) I was informed that they had been given an offer 4 times the asking.  Luckily the seller only bumped up what I had to pay 2 times.  It's hard to be mad since they were still a bargain...but I have a sneaking suspicion that if the 4 times offerer had actually seen these in person, they might have rescinded such a bold pitch.
Posted by Mr. Modtomic at 6:09 PM