The 2016 Flea Market Season Starts Of With A Bang! A Cool Morning Turned Into A Warm Afternoon At The Cornbread "Worlds Largest Garage Sale" And Mr. M Came Home With Some Great Finds. Status: Spring Is Here! 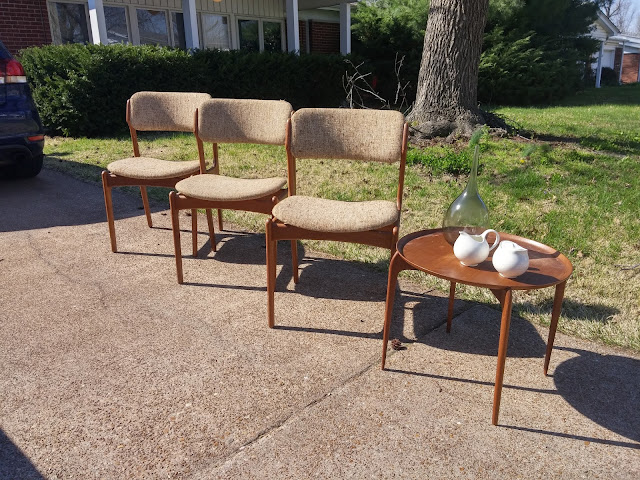 Yessss! What a great way to start the flea season! Well, technically we have already been to one other flea, the swap meet at Six Flags...but that was so early in the season that I consider it a sorta preseason flea. And we didn't find nearly as good of stuff at Six Flags as we did at Cornbread! 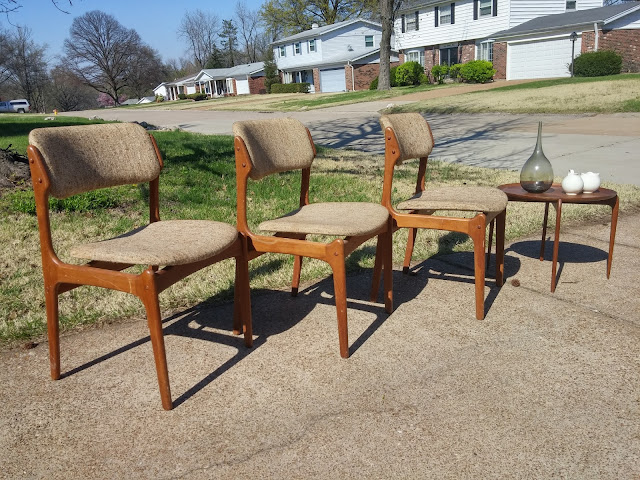 Who'd-a-thunk-it? I managed to find 3 Erik Buck dining chairs and a Fritz Hansen tray table at a flea market held in semi-rural Illinois at a horse racing track. Also found: Eva Zeisel creamer and covered sugar dish and a tall glass bud vase of unknown origin. St. Louis and the Mid-West in general continues to surprise me. The seller who had the Erik Buck chairs also had many other mid-century items including an incomplete (missing cushions) Jerry Johnson lounge chair and ottoman as well as a nice walnut frame Milo Baughman club chair. Some of their offerings were cheap...others kinda pricey. 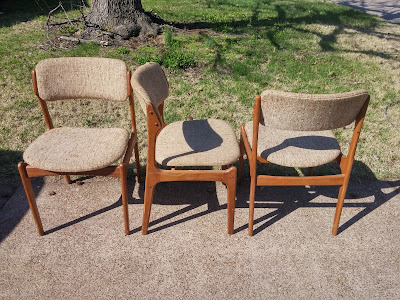 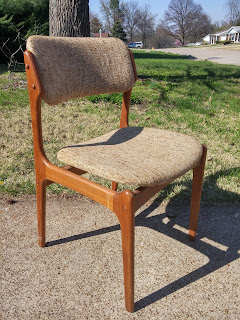 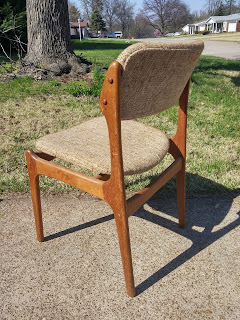 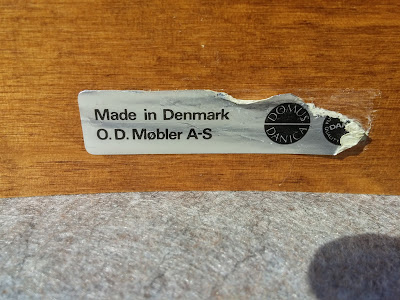 So normally I'd be wigging out over acquiring just 3 chairs since I don't like uneven sets, but thankfully I've already got an uneven set of these waiting to be evened out! So not only is this just a great Erik Buck chair score all by itself, but it finally completes (or evens out) a set that I've had waiting in the wings for ages! The only problem was, well...I didn't really count on finding anything of size at this flea since we haven't really found stuff like this too often in the past. One year I even took my big wagon with us to carry all the big items I was hoping to find back to the Focus Wagon. Didn't really work out. 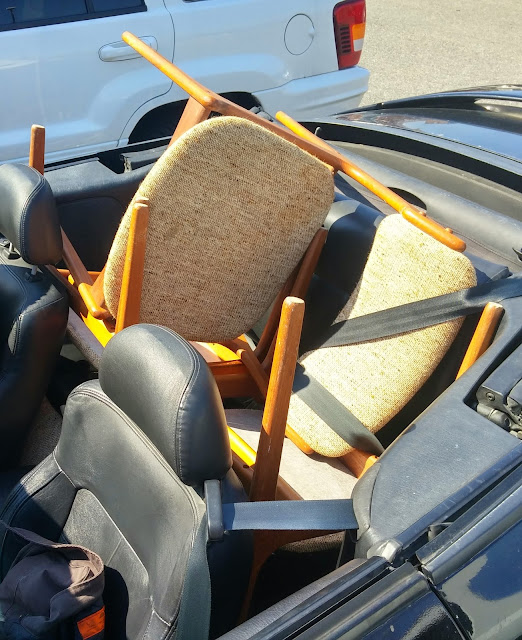 So this year, since the forecast was for clear and 70 degrees, we took the convertible! Oops. Alas, we made it work. With a little more work I could have even put the top up, but with such a beautiful day...who wants to put the top up? Who would have thought that three dining chairs and two people would have fit in an Eclipse Spyder? And what a cliched scene this makes...though it usually takes place in New England in my head. 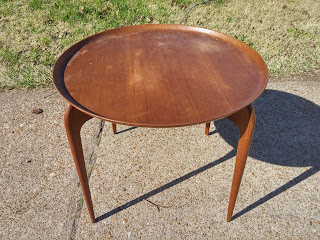 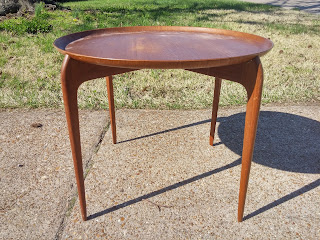 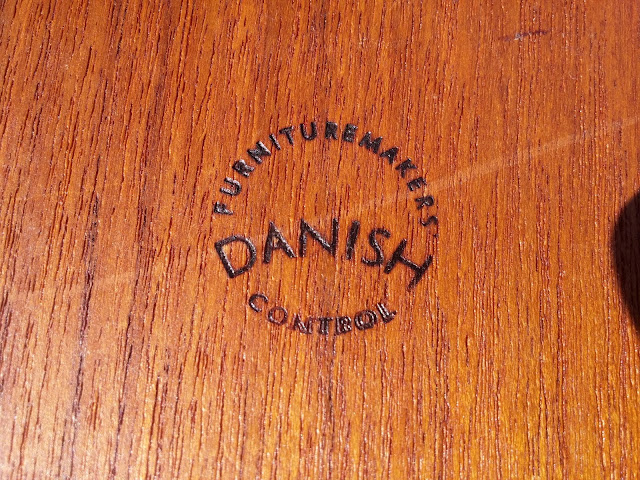 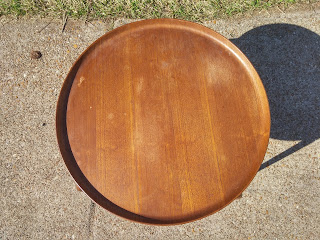 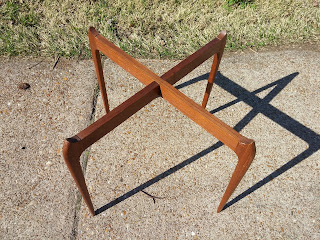 Also found: Fritz Hansen teak tray table! Isn't this amazing? Yeah, it needs to be refinished...but that's pretty easy. I refinished a set of teak nesting tables before and didn't find it too intimidating. This is actually in much better shape than those nesting tables, so it won't take as much work either. But that's not all! 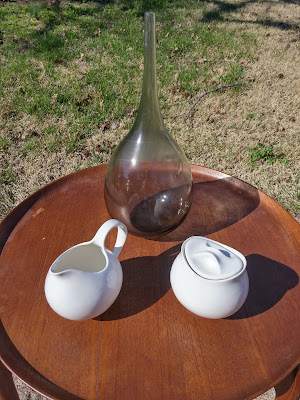 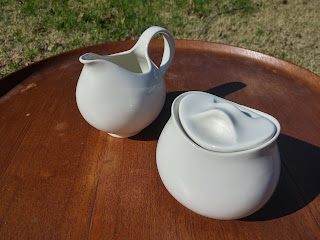 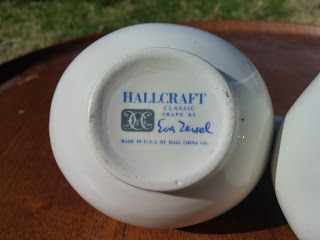 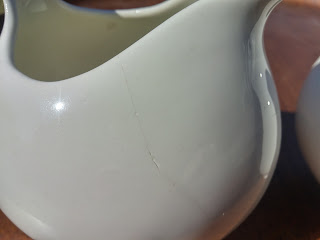 Before picking up the chairs and table we found a couple of small items. The glass bud vase is a mystery and the Eva Zeisel cream and sugar are pretty but the creamer (sadly, the only of the set that's marked) has a nice crack in it. By the way, does anyone have any tips for cleaning the inside of a vase like this? I've swished 409 inside of it to little effect.
Posted by Mr. Modtomic at 11:25 AM